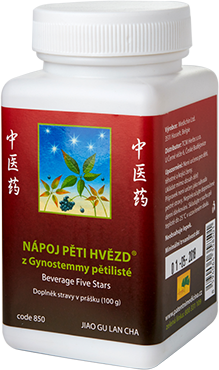 Description according to traditional Chinese medicine: The leaves of Gynostemma pentaphyllum (jiaogulan), which looks like a climbing vine, are called the “herb of immortality” in China. The doctors in one Chinese province noticed that local people lived for 100 and more years very often and their health was extraordinary. One of the main reasons was regular consumption of Gynostemma pentaphyllum extract. The herb was discovered a short time ago and, as is often the case, quite coincidentally. In the 1970s the Japanese government prohibited the use of the artificial sweetener saccharin, which contains chemicals not really good for the organism, and started researching natural sources of sugar such as Stevia and Gynostemma. At that time Japanese researchers coincidentally found out that Gynostemma contains a large quantity of gypenosides (saponins), whose composition is very similar to ginsenosides contained in traditional ginseng. They gave up researching the sweetener from Gynostemma and started investigating this rare and previously undiscovered herb; they were surprised to learn about all the medical treasures hidden in this little inconspicuous plant.
Saponins are herbal glycosides similar to essential oils and have anti-inflammatory effects, dissolve phlegm and strengthen blood vessels. They have a bitter, astringent taste and their effects are similar to those of corticosteroids, but in a natural form! These saponins – ginsenosides give ginseng its reputed medical uniqueness. However, ginseng contains only about 28 of them, while Gynostemma 82. Its main effects are therefore similar to the effects of ginseng, plus other benefits of Gynostemma, so this plant has become a remarkable herb certainly worth noting by modern people, especially with their current “modern” problems, such as obesity, high blood pressure, elevated cholesterol and blood lipids, elevated blood sugar, elevated blood clotting (thrombosis, embolism, angina pectoris, Leiden mutation), various inflammations, but also digestive problems (gastric and duodenal ulcers and inflammations, gout), lung problems (asthma, chronic bronchitis, cough with mucus), multiple sclerosis, as well as mental stress, chronic fatigue syndrome and depression. Another advantage of this herb is its double effect, i.e. it is good against mental as well as metabolic problems. As regards mental problems, it has a calming and mitigating effect in the state of abundance (performance “overheat”) as well as a stimulating and strengthening effect in the state of deficiency (suppression and exhaustion). In case of metabolic problems, such as obesity or emaciation, this herb also has a harmonizing effect – forming the body of obese people and increasing the muscles of those emaciated. These beneficial effects are often used by athletes from the whole world because Gynostemma increases physical strength and activity, improves endurance and concentration.

Packaging: 100g of herbal powdered product (100% natural, without any synthetic or binding agents).

Dosage and preparation: The recommended daily dose of the beverage is 4 grams, i.e. 4 measuring cups once a day. Children under 12 years use a half dose. The powder is poured and mixed with approx. 200ml of hot water. You can then drink it as a warm tea.

It has no toxic effects and can be used for a long period of time without the risk of overdose. The drink should not be used during pregnancy.