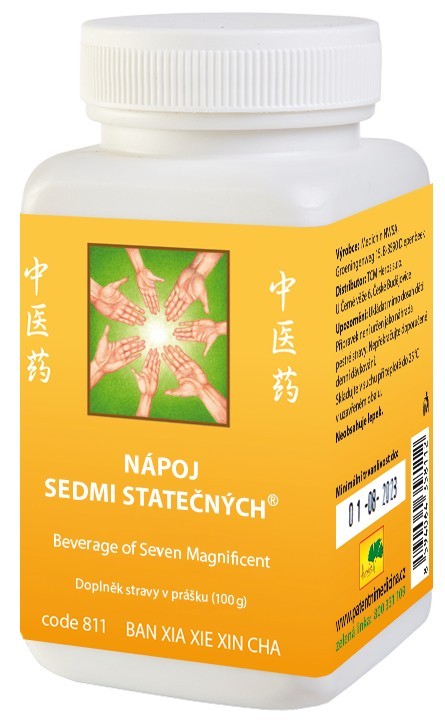 Affects according to traditional Chinese medicine:

In terms of traditional Chinese medicine, it is used in China for conditions such as:

Description according to Traditional Chinese Medicine: A key symptom for the use of this beverage is the feeling of blockage in the upper abdomen, i.e. insufficient movement of energy QI. The path of the stomach WEI and the spleen PI behaves similarly to an hourglass, which in itself (on the principles of perpetual motion) turns from one side to the other, as a consequence of the accurately balanced mechanism, which must be in constant harmony and equal motion. However, this condition must be kept healthy and the sensitive mechanisms constantly adjusted to run smoothly like a Swiss watch. On the other side of the hourglass is the stomach WEI, which sends energy QI downwards and on the other side is the spleen PI, which sends energy QI upwards. Both must be as finely balanced as possible (like a goldsmith’s scales) almost like filigree work and this balance forms the basis of good digestion, but above all the general feeling of energy, vitality, physical and mental well-being – i.e. health in the purest sense of the word! The task of the stomach WEI is “to moisten it with yin oil” and digest food so it is made ready for the spleen PI, which from this digested food (and inhaled air) produces the successful energy QI and blood XUE. These represent the much needed “fuel” for the other organs in the body without which we could not live. However, the no less important task of the spleen PI is also to remove the harmful SHI moisture from the stagnant food JI SHI.

In short – two conditions need to be met for the successful digestion and absorption of food:

So it can be seen that both paths (stomach WEI and spleen PI) are in certain opposition but also in symbiosis and are interdependent in the good sense of the word. Their sine wave ~amplitude must move within certain limits. As soon was one side crosses this limit, the balance is disturbed resulting in illness.

If we demonstrate this in our example above as follows: the hourglass turns more often, but not completely, either to one or the other side. This is due either to an excess of moisture and health in the stomach and in the intestines WEI/CHANG SHI/RE, or due to lack of energy qi in the spleen PI QI XU. The principle of the hourglass means that it must be in constant (even if invisible to our eyes) motion, for if the balancing mechanism stops for any reason, even if for an instance, this leads in our case to secondary energy stagnation QI ZHI. It then depends on the prevailing pathology and which bowl of the scales will it tip…

All synthetic antibiotics, as well as corticosteroids and analgesics, calm the stomach, as our grandmothers used to say, i.e. according to TCM bring coldness to the stomach WEI HAN XU and weaken the energy of the spleen qi PI QI XU. Antibiotics and corticosteroids, due to their extremely cold and bitter nature, “extinguishes” not only inflammation (heat and moisture SHI/RE, fire HUO and hot toxin RE DU), but also the so-called physiological fire of life MING MEN in the kidneys SHEN, just as the fire in the stomach WEI and in the spleen PI. The “digesting fire” is required for the proper function of the middle hearth ZHONG JIAO and food digestion. If the function of the digestive tract is weakened by these chemical drugs, the energy qi of the spleen PI QI XU is also weakened, resulting in excess moisture SHI (the spleen PI has insufficient energy QI XU to eliminate the harmful moisture SHI), whose stagnation subsequently turns into heat RE and the ground (imaginary fungus, compost or smouldering ash) for new inflammation or recurrent infection is again alive and ideally prepared. Just as one proverb says: Sometimes healing is worse than the disease itself… In addition to the overuse of chemical drugs, a combination of stress in its many forms, sedentary occupation and generally poor diet and lifestyle also plays an unfortunate role.

Packaging: 100g of herbal powdered product (100% natural, without any synthetic or binding agents).

Preparation: The powder is poured and mixed with approx. 200ml of hot water. You can then drink it as a warm tea.

Notice: The specific weight of this drink (1 kg of feathers it not 1 kg of iron by volume) fluctuates. The box sometimes seems to be half full (approx. 80 scoops), at another time entirely full (110 spoons), but it always contains exactly 100 g!