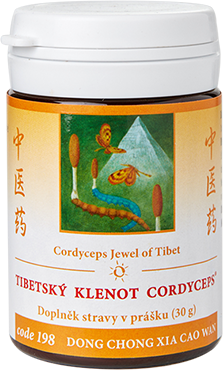 Description according to traditional Chinese medicine: This is a modification of the original traditional Chinese herbal mixture DONG CHONG XIA CAO WAN, adjusted to meet today’s needs. Traditional Chinese medicine does not habitually use a single product to concoct herbal mixtures because it follows the principle that “one herb does not bring the spring.” Cordyceps sinensis (caterpillar fungus) is, however, a real gem, one of the jewels of the Chinese pharmacopoeia, and traditional Chinese medicine is happy to make an exception here. In fact, Cordyceps is composed of fungus (representative of the plant kingdom) and a larva (representative of the animal kingdom), i.e. translated into today’s language: 2 in 1. It can therefore efficiently strengthen YANG as well as YIN, and in particular the kidney essence JING, which is the most important part of our organism, responsible for the condition of the body, the soul and the mind. The kidney essence JING is, figuratively speaking, wax on the candle of our life which slowly but inexorably decreases and depletes. There are not too many products in traditional Chinese medicine that would top up and multiply the kidney essence JING without actually weakening other organs. Cordyceps offers these properties and thanks to its extraordinary characteristics regenerates our organism, exhausted either by diseases and medicines or by physical or mental work (recharges the batteries). It is good also for healthy people to maintain their health not only in terms of quantity (life expectancy), but in particular its quality. Many of today’s “modern” diseases, such as conditions with impaired immunity (frequent and recurring infections, asthma) or conversely elevated immunity (all allergic diseases, eczema, autoimmune diseases, cancers) are, according to traditional Chinese medicine, caused by a lack of inborn kidney essence JING and YANG (i.e. coldness in the lower burner), which slowly results in deficient YIN in the lungs (pseudo-heats in the upper burner), causing the well-known infections, inflammations, allergies and eczema. This “coldness down and heat up” is manifested e.g. as a feeling of cold feet and pink cheeks. Antibiotics, chemotherapeutics and synthetic corticosteroids “cool down” the heat in the lungs (in the upper burner), thus suppressing the inflammation, but at the same time “cool down” the already dwindling kidney essence JING (in the lower burner), putting wet wood on an almost extinguished fire and thus opening the door to the infamous vicious circle… No chemical medicine provides black-and-white effects – it is either black, or white, but Cordyceps actually offers these ideal, harmonizing, “black-and-white” properties, so needed for our organism.

In China, Cordyceps is used even where Western medicine deploys medicines of the biggest calibre, such as hormonal corticoids. These synthetic corticoids, as we know, have a number of negative side effects and do not treat the cause (only suppress the symptoms), and they are used against a number of conditions. Cordyceps also has effects similar to those of corticoids, but without any such side effects on the health of people, so it becomes a truly unique herbal product. Another huge advantage of Cordyceps is that it can be used in the long term, without any difference in sex and age and without any observed side effects.

Packaging: 30g of herbal powdered product (100% natural, without any synthetic or binding agents).

Dosage: 1 measuring cup 2 times daily (preferably in the morning and at noon, because for night it is then a plethora of unneeded energy), children from 3 to 8 years of age take 1 measuring cup daily (the levelled measuring cup is about 1.5 g).