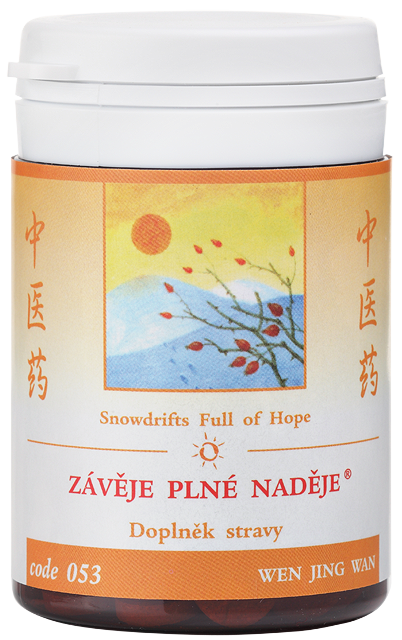 Description according to traditional Chinese medicine: This is a modification of the original traditional Chinese herbal mixture WEN JING WAN, adjusted to meet today’s needs. This mixture mostly acts on menstrual problems caused by coldness due to deficiency on genital pathways CHONG and REN MAI and the subsequent blood blocks.

Such women suffer from mild, persisting vaginal bleeding, irregular menstruation (premature or delayed), purple blood clots in menstrual blood, mid-cycle bleeding, painful menstruation, tension and coldness in the underbelly and infertility. The basic cause here is coldness arising from deficiency, which results in blood blocks; later it changes into heat (just like low water level in the river has no strength to flow, gets blocked and later changes into heat, similarly to blocked coldness in the cellar ultimately resulting in self-ignition of coal), therefore the symptoms are in this case an expression of coldness as well as heat (coldness down and heat up), equally to the signs of simultaneous deficiency and excess.

The symptoms of heat and blood deficiency and its subsequent stagnation include dry lips and dryness in the mouth (unlike false heat due to deficiency YIN, which has several similar symptoms, but unlike the above is manifested by dryness in the mouth and in the throat, never by dry lips!), missing feeling of thirst, but also elevated temperature in the evening (unlike deficiency YIN – in the afternoon) and warm palms and soles of the feet in the event, possible with sweating of the palms and the soles.