Taming of the Hot-Blooded Horse (code 018)
RE XUE WAN mod. 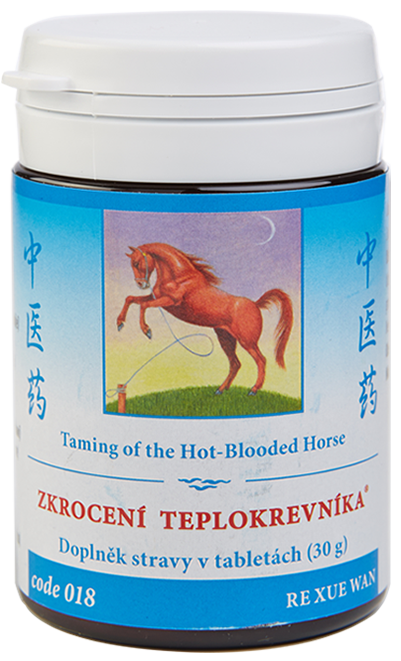 Description according to traditional Chinese medicine: This herbal mixture mostly cools down heat in the blood RE XUE; the English name (Cool Blood), referring also to being cool, means being calm, balanced, keeping some distance, maintaining a cool head and not letting things irritate you. This best describes the mode of action and the effects of this mixture. Heat RE and fire HUO are mostly caused by excessive or suppressed emotions, “hot” food or harmful energy pushed from the surface to the depth (improperly administered antibiotics, corticoids, vaccination…). Similarly, some people may have a constitutional (inborn) disposition for heat, which is especially visible in little children who are “hot-blooded” and overheat easily. According to Chinese medicine, there is a very small difference between heat RE and fire HUO because “heat is a diminished fire and fire is the ultimate heat”. In case of attack on the first layer of WEI, superficial and defensive, is attacked, when symptoms of a beginning influenza appear, this mixture is not suitable. The mixture is priceless when other, deeper layers are attacked. When the second layer of heat QI is attacked, mostly from the stomach and lung pathway (e.g. tonsillitis, bronchitis), the symptoms include thirst, fever and yellow, dry coat on the tongue. If harmful heat attacks the nutrition layer YING (third layer of heat RE), the symptoms are fever, culminating at night, restlessness and skin rash (e.g. pneumonia, eczema). If harmful heat attacks the blood layer XUE (the deepest, fourth layer of heat RE), the tongue is dark red (similarly to scarlet fever in children), purple-red spots and rashes appear on the skin, sometimes with ravings, consciousness disorders and bleeding in different body parts – bleeding from eczema, bleeding under the skin, bleeding nose, coughing up blood, vomiting blood, blood in the stools, bleeding from haemorrhoids, blood in urine, sudden or persistent menstrual bleeding (e.g. psoriasis, chronic eczema, meningitis). Many times, and quite often in life, it is necessary to “cool down hot blood and hot heads and to tame not only the hot-blooded horse to find health again…”.