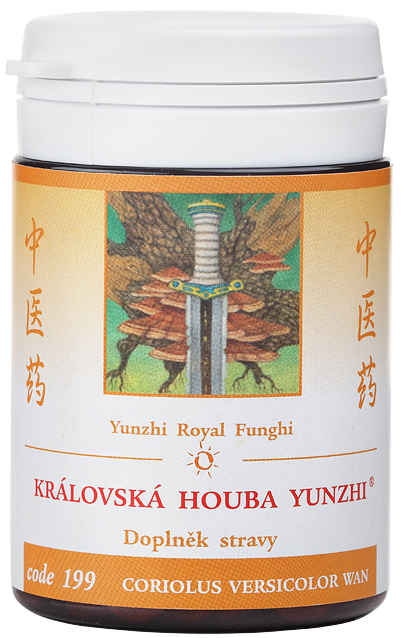 Description according to traditional Chinese medicine: This is a modification of the original traditional Chinese herbal mixture CORIOLUS VERSICOLOR WAN, adjusted to meet today’s needs. An extract from the mushroom Yunzhi (Coriolus versicolor), called “Sky Kingdom grass” in China, is a real treasure among the herbs of traditional Chinese medicine and its use was a prerogative of emperors and their courts for centuries. It prolongs youth, delays old age and strengthens the organism, both body and soul. Its effects are especially strong against tumours which, according to Chinese medicine, are always a combination of multiple factors and are therefore hard to treat even by Western chemical medicine. From the point of view of Chinese medicine, the neoplastic process is a stagnation of phlegm TAN on a specific pathway. This stagnation, which we can imagine as a “clogged gutter” where moisture is slowly deposited above the clog and after some time the clog changes into internal heat (similarly to moisture blocked in the cellar which results in self-ignition of coal). The resulting heat then dries up the YIN of the kidneys and the liver, i.e. the oil in the engine, the deficiency of which is manifested by weak immunity, and the vicious circle is closed, slowly but tightly… Quite often the gutter walls cannot bear this inadequate and long-lasting pressure any more and are punctured in the place of the block, which corresponds to the formation of metastasis in Western medicine. Yunzhi (Coriolus versicolor) is the ideal aid according to Chinese medicine thanks to its effects and qualities, tailored to such conditions. Radiation therapy and chemotherapy burn the already ravaged landscape of our organism (weakening of the kidney and liver YIN) and increase the internal heat, it is therefore necessary to reclaim the landscape as soon and as effectively as possible and to replenish the supplies. And once again Yunzhi (Coriolus versicolor) is the optimum product to do that because it energizes the defensive strength of the organism tremendously so that you can get rid of the undesirable clogging, simply put it “cleans the pipes, blows through the nozzles, adjusts the carburettor, tops up oil and kick-starts the engine”. That is why it is used successfully in China not only against cancers but also against diseases such as chronic fatigue syndrome, EB virus disease, multiple sclerosis, rheumatoid arthritis, vitiligo, alopecia areata, diabetes mellitus, Hashimoto’s thyroiditis, Sjoegren’s syndrome, Raynaud’s syndrome, etc.).

Packaging: 30g of herbal powdered product (100% natural, without any synthetic or binding agents).

Dosage: 1 measuring cup 2 times daily (preferably in the morning and at noon, because for night it is then a plethora of unneeded energy), children from 3 to 8 years of age take 1 measuring cup daily (the levelled measuring cup is about 1.5 g).