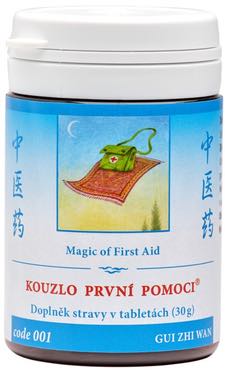 This herbal blend gracefully adjusts and harmonizes WEI defence layer and YING nourishment layer by expelling the external attack of FENG wind or FENG/HAN cold wind from both layers and making the muscle layer permeable so that QI energy can flow freely again (you can say it rolls boulders off the roads…). It belongs to the most valuable herbal mixtures used in TCM when the exogenous wind of FENG or FENG /HAN cold wind invade the surface of our body and it also corresponds to the 1st line of defence of our organism and is therefore the “first to snap” (see also the name of the mixture). It is intended for individuals whose WEI QI defensive energy is primarily weakened (deficient or cold constitutional types – see Test for optimal Diet) and are thus susceptible to frequent illnesses. On the contrary, it is unsuitable for hot and superfluous types. It is therefore often combined with a herbal mixture named Stability of the Palace Pillar (201), which expels cold, wind, and damp from joints and muscles in acute and chronic joint, muscle, and lumbar pain or rheumatic pain, including acute lumbago (sciatica).

Metaphorically, we can think of this condition as a defence of our country (ZHENG QI favourable energy, i.e., good immunity) against an external enemy (XIE QI noxious energy – in our case, FENG wind or FENG /HAN cold wind, i.e., viruses, bacteria…). Our troops on the borders of the country (WEI defence layer – associated with YANG, i.e., action) are to defend the country against external enemies and at the same time to protect the population (YING layer of nourishment – associated with YIN, nutrition) to be able to live peacefully and produce enough food, including for the army (WEI defence layer). As you can see, one depends on the other, equally. If our country is militarily weakened, it inevitably does not have enough troops on the border and our defensive wall (WEI’s weak defensive layer of skin, subcutaneous tissue, and muscles) is so easily attacked by the external enemy (FENG exogenous wind or FENG/HAN cold wind), that it can easily penetrate the rear (YING layer of nutrition – blood and body fluids). Here, it settles down and usurps (blocks the flow of QI – mutual communication between the population and the military, which is not getting rations) the other inhabitants by eating from their already meagre supplies that the rest of the army also lacks (imbalance between the WEI defence layer and YING food layer). A powerful ally must be summoned quickly and purposefully (in this case, the Magic of First Aid magical herbal mixture) to set the record straight and the intruder (the malevolent FENG wind or the cold wind of FENG/HAN) will be firmly and properly expelled from our land (sweat) and pacified, supplies will be replenished (YING nutrition layer will be nourished, and thus WEI layer of defence), harmony, communication, and mutually beneficial symbiosis will be re-established (the two layers will be harmonized) between the population (YING nutrition layer) and the military (WEI defence layer). This is the only way to continue to function in today’s world, where one never knows when, from where, and what kind of missile (Covid?) is about to come😊.

The typical first symptoms of the invasion of the body surface by FENG, the exogenous noxious wind, or FENG/HAN cold wind are the following:

Do not use: when attacked by external wind chill of FENG/HAN XIE QI, when at the same time the internal heat of RE is already present in the patient (in this case, use, e.g., Drop Forest Spring – 060); do not use during the summer either, in hot weather, in fever with thirst, with nosebleeds, or with sore throat (in this case, e.g., Cold of Morning Mist – 002 or Beverage of Silver Wind – 844 should be used). Not to be used in case of SHI/RE internal damp and heat, nor should this mixture be used by people who drink a lot of alcohol (they have internal heat of RE). When using the mixture, avoid consumption of meat and fatty products, milk and dairy products, raw fruits and raw vegetables, and alcohol.