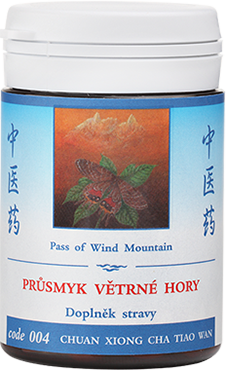 Description according to traditional Chinese medicine: This is a modification of the original traditional Chinese herbal mixture CHUAN XIONG CHA TIAO WAN, adjusted to meet today’s needs. This mixture focuses on the onset of an ordinary cold with the following symptoms: chills and cold fever, increased sensitivity to cold which improves with heat, severe headaches and especially pains of the neck which is stiff, most often caused by drafts and blowing air after sweating. Other manifestations may include sneezing, cough and water-thin nasal discharge, but there is never sweating and a feeling of thirst at this stage.

Attention! Use this mixture only at the onset of influenza, until the first sweating! After that switch to Cold of Morning Mist (code 002).

In case of rhinitis these tablets can be suitably combined with Shaolin Oil (code 700), which is applied under the nose as needed. In case of allergic diseases it can be conveniently combined with the herbal mixture Seclusion of the Hermit Chang (code 114), which prevents harmful surface wind.